Okay, so I'm not getting  paid for this (though I totally should be), but since I always tell you what companyies or products make me mad (Comcast and TOMS are at the top), I thought I'd also show you some of the things we're loving right now. And by "we," I mean Stow.  Maybe we should call this post "Stow's Stash." (Hmmm...then again, maybe not.  The alliteration is nice, but it sounds a bit too drug-gy for what I'm after. Plus it's slightly redundant.) Anyway, here's a list of his favorite new toys, which happen to be mine, too. 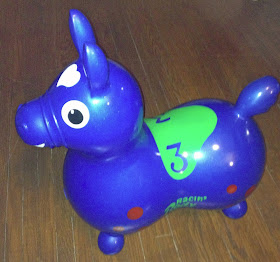 I'm so glad they dropped the  "g" from "racing." That makes this thing so much cooler for sure. (Don't even get me started about stupid kids' toy names). Stow first encountered a Rody when our OT brought one for him to play with during one of their sessions. He hated it. Or, at least we assume he hated it because he refused to get on it and then picked it up and carried it to the front door where he left it to wait for its owner to put it back in her car. By that time, I'd already gotten one for him for Christmas. And since I kinda refuse to buy and return things before Christmas, we kept it. Good thing, too. Now Stow loves to climb on it, bounce up and down like crazy, and then tumble off of it as if he's lost his balance (this is what actually happened the first time he rode it, so he seems convinced this is the only way to dismount a rubber bouncy horse). I love it because it forces him to work on his side-to-side balance. Due to his low muscle tone, he tends to favor his left, and the fact Rody is so wobbly makes Stow use muscles that he might otherwise avoid. 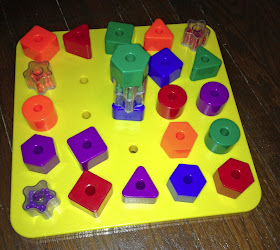 When Stow got his early intervention evaluation, the therapists were enthralled with his fine motor skills. Who knew that stacking five little blocks was a superhuman feat for a 12-month old? Seemed normal to us. This peg board, which the OT also introduced, lets him play to his strengths. The first time Stow saw it, he messed with it non-stop for 30 minutes. He particularly loves the pieces that rattle. As he gets older we will work on shapes, colors, and sorting. For now, he's content making towers as tall as he can before they come crashing down. 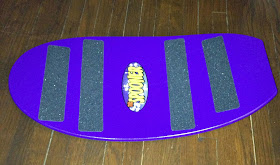 Despite it's unfortunate name, and despite the fact that this toy entered our house as a birthday present for Pink P, Stow loves to stand on it when watching his older sibs play or watching TV. I like it because it helps him work on his overall balance, which should, in theory, help him develop better gross motor skills. I can't decide if this thing is worth the $40+ I spent on it, but it's a good toy for our house. It can be used inside giving kids a way to stay active on cold or rainy days, and it takes up very little storage space. Most of all, though, it's great for helping Stow develop strength and balance, and so far, anyway, Pink hasn't minded sharing it. 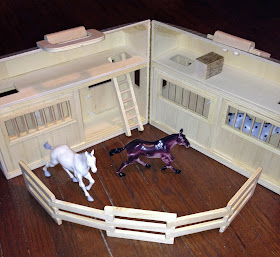 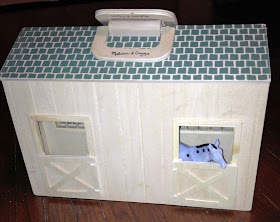 This is another Pink P present that was quickly commandeered by her little brother. She loves the horses and will play with them alone. He loves the stable. So many doors to open and close. So many horses to put in and out. It's wooden, sturdy, and folds up, so what's not for a mom to love? And, just like the Spooner, Pink P's happy to share.

The first Thomas train entered our lives on Sky's second birthday six years ago. Before Sky got hooked, I swore we wouldn't buy any overly commercial kids' toys (I also swore Pink P wouldn't wear pink or love princesses, so you see where my convictions get me).  For the past few months, trains have been at the top of Stow's play list. He cares enough about them to talk about them, so that alone is worth adding to our collection.
Mom on the Edge at 10:31 AM
Share