Now that we've moved, one conversation will no longer be necessary. I will no longer have to find a painless way to explain why our pumpkin got smashed.

The last time we carved a pumpkin, due to our proximity to campus, it made it exactly one day before some drunk college students smashed it. 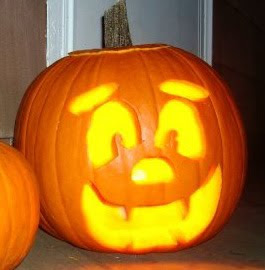 (How could anyone be aggressive toward such a happy looking pumpkin?)

The cruelty of the smashed pumpkin was that it was not missing. In fact, it was smashed in the road in front of our house. If it'd been missing, I could have told Sky an awesome story about how it came to life and set out for grand adventures. But, since its crushed face could clearly be spotted at the foot of our drive way (a fact I did not realize until we were driving past it on the way to school), I couldn't come up with a good explanation. The conversation went something like this:

Well, duh. Why didn't I think of that?

Unfortunately, the move has not eliminated our recurring conversation about the threat of falling meteors. Our old house was 2 1/2 blocks away from the nearest sign that looks like this. 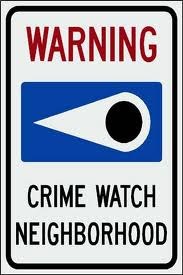 So, whenever Sky began to panic about the imminent doom predicted by the neighborhood watch sign, I told him not to worry since we didn't live on the same street as the sign. Clearly, I argued, this meant that we were safe from all space debris.

Alas, in our new house, Sky can see one of these signs from his bedroom window. Fortunately, recently he has started to read, so now he believes me when I tell him the signs have nothing to do with meteor showers. I think I'm going to miss the Sky that believed we lived in the middle of a meteor shower zone. That's a whole lot more fun than worrying about stupid criminals and pumpkin smashers. 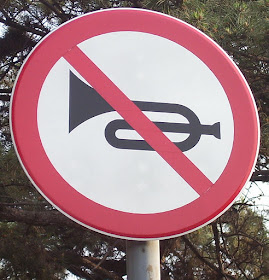 I mean, who doesn't hate an inconsiderate trumpet player?

(Okay, okay. I know this is a "no honking" sign commonly found in China, but it's much more fun to think someone really has a grudge against trumpets).
Mom on the Edge at 8:39 PM
Share