To TV or not TV 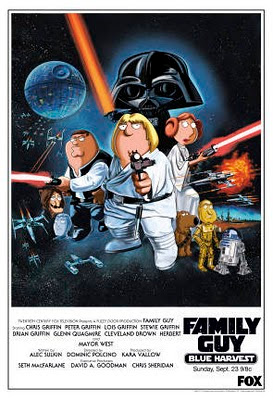 Ren is an awesome dad. He comes up with the most insane yet totally effective ideas for getting the kids to do things. Kids leave all the grapes in their bowl? Put them in a cup, add a little water, and tell them it's magic grape juice. Almost 3 year-old not ready to give up the pacifier? Pretend to eat them, thank her for the yummy food, and never let her see them again. (That day, when I got home from work, she was quick to tell me how incredibly silly daddy was, forgetting about pacifier separation anxiety altogether).

Sometimes Dad's ideas misfire (usually because cultural differences get in the way). We've already established that Sky is a huge Star Wars fanatic. Dad likes to check out videos from the library but he doesn't like to sit for an hour and watch Sky play on the library computers. So on this particular day, Dad promised Sky he could watch a "new" Star Wars cartoon as soon as they get home if Sky didn't do the computers that day. Both came home happy, and Mom was proud to hear how well Dad managed to use positive reinforcement avoid a Sky-rific meltdown.

That is until Mom saw what the movie was -- Family Guy Star Wars. Sure it contains a warning that says it's not meant for children. But the writing is small and in a corner on the back of the case, and Dad was too busy keeping track of Sky to read it anyway.

Now, we don't let Sky watch much TV period because either a) it zombifies him, or b)it immediately causes him to imitate what he has seen. Take Thomas the Train for example. Like every other 2-3 year old, Sky loved Thomas. Problem is that Thomas and his friends crash, a lot! So first watch Thomas crash, next watch toddler crash into walls, furniture, people, etc. Turns out Sky identified a tad too closely with Thomas. Walking through the streets and train stations of Tokyo, this became a major issue. All the bumpy strips (for the visually impaired) that run down the middle of sidewalks and through station concourses look a lot like train tracks to a 3 year-old autistic kid who believes he's a train. So, first we'd hear the extremely realistic sound of a train releasing steam, and then he'd be off following the strips (which never take shortest route and which usually didn't go where we were headed). We only really lost sight of him in the crowd once (at Shinjuku station), but by then, he already had a tag pinned on him with his name, address, phone number, and a message that said he didn't speak much Japanese.

Of course, we didn't know he was autistic at the time, but I suppose this could explain why whenever he was uncomfortable in a social setting or whenever he wanted to make a new friend, he suddenly turned into a human train, usually to humorous effect. Want to impress the group of 20 college women at the next table at Olive Garden? Give them your best high decibel train whistle. Upset that the pastor is pouring water on your baby sister's head (i.e. baptizing her)? Toot at him, loudly, just as he closes his eyes to say a prayer. Uncomfortable when new people come to the house for dinner? Run in circles imitating a train, station stops and all.

So, yeah, anyway, television can be a problem at our house.

Thing is, autistic kids don't process unexpected change well, and when it comes to Star Wars, there is no reasoning with Sky anyway, so not watching the movie Dad promised was not an option. After all, Sky had done a really good job on their errands.

Worried about the foul language and the sexual overtones,I made Sky promise that he would under no circumstances repeat the words or imitate what he saw. "OK, Mommy," he promised, puzzled as to why I was so worried about a Star Wars movie.

When I sat down to watch with Sky (to do damage control or stop the movie altogether if necessary), I had to laugh. I mean, there was a lot of inappropriate content for a kid his age, but the only thing he even noticed was the "bad" word "stupid." And when he heard that, he exclaimed: "Mom, he just said a BAD word! Don't worry, I never say stupid!" He was so enthralled with the space ships and the familiar characters, he never even registered the other stuff (though it didn't hurt that I fast-forwarded through large sections of the movie whenever Sky left the room--something he is prone to do whenever the music crescendos). It also didn't hurt that I told Sky Pink P was too young for it and "disappeared" it altogether the minute she got home from preschool.

This incident reminded me of the first Father's Day we celebrated after moving to the US, when Big Sissy was still in high school. Back then, she met weekly with an English tutor, which turned out to be a very fortuitous thing. On the way home one day, she said, "My tutor told me to show you the present I got for Dad for Father's Day," and pulled out a key chain. We're lucky I didn't crash the car. In bold sparkly letters, the key chain said "Sugar Daddy."

Thank you tutor for your intervention!
Mom on the Edge at 8:34 PM
Share